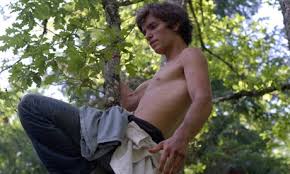 Went to see Ivul today at the Renoir. I really enjoyed it a lot. It’s visually stunning, with beautiful production and locations, weaving season and nature into the story.

The French countryside is so strongly evoked as is the crumbling Chateaux. In the winter sequences especially you can almost feel the cold. It has a lot in common with Agnes Varda’s Vagabond in that respect. The sound design is also interesting, a collage of avant garde music and naturalistic effects, but not done in a heavy handed way.

It reminded me both of The Cement Garden and Titus Groan in elements of the story. There was some beautiful use of backwards film efffects, time lapse and acrobatic tree climbing. Sometimes the stock footage really jars you out of the story. Good performances and what looked like a lot of improv – especially with the little girls who are great. I felt the middle sagged a bit – especially as the first act sets it up as Alex’s story and then he disappears almost entirely in the second act.

The Art of Being Normal – Review