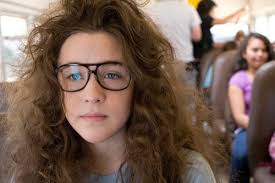 We saw this today at the London film festival. It is a low budget high school comedy/ dance movie.

A young intersex girl – nicknamed Spork who is teased at school. Decides to enter a dance off.  Her black neighbour – Tootsie Roll and her gang teach Spork to crunk (or is it crump?) She finds love with the school gay boy and with the help of her new friends goes on to win the dance comp and defeat the horrible blonde beatches.

A typical high school plot is livened up by bright colours sassy performances and some John Waters style humour. It has a definite queer sensibility and is somewhat like Napoleon Dynamite, but not quite as good.

The great thing about that film is John Hedder does his own dancing at the end and he is brilliant at it. Here Spork is body doubled for some of her dance and it seems to make it less authentic.

Some scenes felt too long, and although Spork herself  was great some of the other characters felt under developed. Also, it is hard to have a sassy knowing wit about the genre cliches and then to treat them seriously in more heartfelt scenes. I felt it sometimes doesn’t quite pull this off.

I am trying to write a similar story in this genre and to me it was interesting to watch for both it’s strong points – the off beat humour and characters and it’s weaker – the emotional depth.

Bone: The Complete Cartoon Epic in One Volume