Cave of Forgotten Dreams is the new documentary by Werner Herzog.  He gained exclusive access to film inside the Chauvet caves of Southern France, capturing the oldest known pictorial creations of humankind in their astonishing natural setting.

The cave painting were  discovered in the nineties by three hikers, they are in mint condition as a collapsed cliff trapped the cave entrance 5000 years ago creating the hidden underground cavern, trapping the paintings and also the perfect footprints and hands prints of the men and wild animals that used the cave. The paintings themselves date from about 30,000 years ago!

The film is beautifully shot in 3D. In the flickering lamplight the camera tracks around the walls and floors of the cave and across contours of rock on which the pictures appear, evoking a magical movement of the drawings. A spirited aliveness – that the early homosapiens must have felt they possessed. Werner Herzog calls the drawings a form of proto cinema. They even evoke animation – changing as the camera moves round the rock, with some of them drawn with multiple legs to suggest movement.

The space is like a mythic cathedral from another time, and a beautiful soundtrack of cello music and choral vocals really set this off perfectly. Herzog’s poetic narration muses on the beauty of the cave and the spiritual and religious possibilities of the drawings, but also the unknowable gulf between these – our ancestors and ourselves. He sees the cave as evidence of the first awakenings of the human soul. The paintings as a testament to pure flowing creativity.

Herzog really captures the sense of wonder around the drawings as well as the awe-inspiring local landscape. Plus his trademark poetic storytelling interviewees – all scientists involved with the cave. He has said in the past he sometimes scripts lines for his interviewees and again here there was one interview in particular that just seemed too Herzog to be true (in a good way). He also manages to get some albino alligators in at the end. Plus a flying camera shot of the landscape and the crew. At many moments juxtaposing the creativity and storytelling of film with the creativity and storytelling of the ancient paintings. He ends on the brilliantly cryptic line – “We are like crocodiles looking back into the abyss of the past.”

A truly fantastic documentary. It made me think of The Song Lines by Bruce Chatwin – it’s ideas of Dreamtime and once again of Riddley Walker. The past and future connected by these hand to mouth stories, with a life of their own. The people creating them not even really knowing their purpose or longevity.

To me it is just amazing how art, stories and creativity have always been in us, part of our very primitive make-up at a time even when such things may have seemed a ‘luxury’ and yet there they are, flowing across ancient stone walls. Such creativity is deeply imbedded in our subconscious much like the cave embedded in the hill. It flow’s through us at a deep level and maybe we are just a conduit for it not it’s owner. 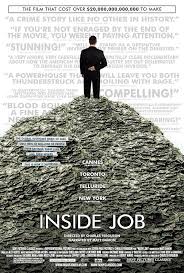 We saw Inside Job at the cinema the other day. It’s a look at how the American Banks and traders caused the massive global recession through the grossly irresponsible creation, overvaluation and sale of essentially valueless financial products. The film makers call it the world’s biggest ponzi scheme.

The bankers were helped by the politicians who over decades systematically removed all monitoring of financial markets, banks and insurers and broke all the human links in the chain between customers, mortgage providers and the banks. Creating a total disconnect between the puffed up financial products and the real people who’s debts they were composed of.

The film suggest politicians, economists and the rating agencies are all too intertwined with the big financial institutions. Mainly because they all serve on the boards of these companies. Who also fund their political campaigns or institutions to the tune of millions of dollars. The film shows how this reliance on big money donors by American politicians has also stifled the subsequent clean up of the industry.

The filmmaker is obviously an expert on finance and explains clearly all the nuances of how the crisis developed and how it is now effecting working people round the world.

He has done meticulous research on his interviewees – bankers and government advisors, and it is a pleasure to see him trip them up bringing up their conflicts of interests and bad financial advice as they try to justly their inflated pay checks and perks. Many of them are visibly shocked when what they take to be an idiot interviewer goes in for the kill. Overall a well made, comprehensive and informative documentary.

Wow – what can I say, I thought this was an amazing film documentary.   Nev Schulman, a hip New York photographer in his twenties, shares a loft with two filmmakers – his brother Ariel and their friend Henry Joost. They document dance events.

Abby an 8 year old girl, who like painting, contacts Nev via myspace to ask if she can paint one of his published ballet photos. He writes back to encourage her. She sends him the finished painting and a letter from herself and her mum. Nev start a correspondence  with Abby and her mother sends more paintings. They are pretty good for an eight year old so his friends begin to document the story.

Then Abbys older sister Megan contacts Nev. She is nineteen beautiful and a musician. She sends some songs. They start to chat online. Over nine months they become closer via  the net and phone and there’s an attraction between them. Nev falls for Megan and her family, but are they all they seem? The friends decide to take an impromptu road trip to their small town and find out.

After watching for about ten minutes I pretty much guessed how things were going to pan out in terms of the ‘mystery’  and although the trailer and some scenes make this out as some kind of serial killer scenario it most definitely isn’t.

Though it’s obvious who the deceiver will turn out to be what is most amazing is her genuine likeable character and also how her real family is easily as interesting as the one she created on the internet.

The filmmakers by contrast seem to be more cynical and worldly. So much so that you start to question whether they have worked out the deception and are just exploiting this peach of a story that has fallen into their lap. Parts of the film feel staged and have lead to accusations that events have been recreated and altered or that the whole thing is a fake documentary.

Whether this is true or not it only adds more layers to what is a truly riveting tale about deception and fakery. There are so many levels and judgments woven into the story almost unconciously. Everyone manufactures their personality to some extent on line but – how much is real and how much is fake? When everyone’s faking to some extent -where is the moral centre? Which deception is worse – the one for profit or the emotional one? Why does society think it’s better to be a  young NY hipster artist than a small town painter and housewife? Is it acceptable to fake scenes in a documentary?

The thorn in my heart is a feature documentary by Michel Gondry about his Aunt Suzette – who was as a primary school teacher in small village school for all of her working life.

The film documents her return to each of these schools, where she meets up with her grown up students. They have great fondness for her an she is described as an imaginative teacher ahead of her time but also a little strict.

By way of contrast we see her with her family and focus on her difficult relationship with her son Jean Yves. He is a middle aged gay man who still lives at home with her, and is a dreamer and creative detached from the world. He loves super 8 films and model making What Michel might have been in a different incarnation.

We see Jean Yve’s train set in the inter titles, but I was a little disappointed that the film didn’t have more of Ghondy’s own trademark surreal animation in it. There is one great  sequences where  Michel and Suzette give a workshop to  kids about making invisible costumes for film and afterwards we get to see the magical film they created.

Over all a loving crafted exploration of Ghondry’s relatives and the family dramas are revealed with a lightness of touch. (Something I’m sure I wont be saying about his next film – The Green Hornet!)