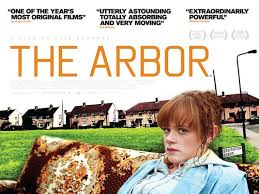 We went to see The Arbor yesterday. A film by Clio Bernard. It’s an experimental documentary. Portraying the life  of the late Bradford playwright Andrea Dunbar, who died around ten years ago, and the stories of her three children.

The film concentrates on Andrea’s eldest daughter – Lorraine Dunbar, who has had a terrible life of drugs, prostitution, abuse and prison. It climaxes with a quite horrible turn of events in her life.

The interesting thing about the film is the way it’s been made. The voices of the real people were recorded and actors portray them in the film lipsynching to their words. It is reminded me of those old Aardman Lip Synch films –  especially one Peter Lord made called Going Equipped that was about a young offender.

The technique works well with real actors, though it does starts to fall down when the dialogue gets emotional. The other brilliant thing they do is stage segments from Andrea’s first stage play ( also called The Arbor) in the centre of the estate where it was set. Locals stand around in the background watching the scenes and giving them an extra dimension.

All these imaginative techniques give interest to what is a very bleak story. A story that goes part way to debunk the myth that being a successful artist writer can change lives.

How Fiction Works by James Wood