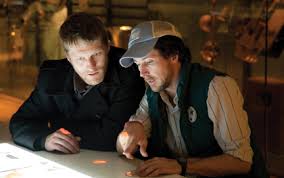 We saw this yesterday at the London Film Festival.

Tom (Tom Fisher) is forty. He walks out on his wife and baby boy and his seemingly happy life.

He starts living rough in the streets and parks of London. After being beaten up one night Tom meets Aiden (Aiden Gillen) a happy go lucky trampish bloke, in the A and E foyer. Aiden follows Tom around and Tom is too polite to tell him to piss off.They become friends and Aiden invites Tom to stay at his flat. Whilst there Tom becomes involved in the troubles of Aiden and his prostitute girlfriend Linda (Riann Steele).

The film is a microbudget movie shot on digital video and directed by Jamie Thraves – who directed the brilliant – The Low Down nearly ten years ago. He again appears to have developed the story through lots of improvisation.

Aiden is the typical nutter you see wandering the streets of London, a care in the community type who has fallen through the net. He is played with humour and joy by Aiden Gillen, who is the best thing in the movie. The other two are darker characters who keep their problems hidden and as a result both end up lashing out.

I enjoyed the film, although it does lag a bit in parts and paradoxically the rough and ready lowfi style pulls you out of it on occasion. Things are kept simple and the story and locations are all written with the budget in mind but for a micro budget film it was very strong. Thanks to the performances and solid film making skills of the team.

Enjoyable over all It had more authentic heart than Heartbeats, though not as slick. really hope that Jamie Thraves gets the money to make another film as I am a massive fan of The low down.